In terms of sheer geographical diversity, few places in the world are as richly endowed as Himachal Pradesh. High snow capped mountains, deep valleys, gorges and lakes, meadows, pastures, glaciers and rivers, all form a part of this immense spectrum. These natural gifts make this hilly state an eternal and perpetual playground for lovers and enthusiasts of adventure sports. 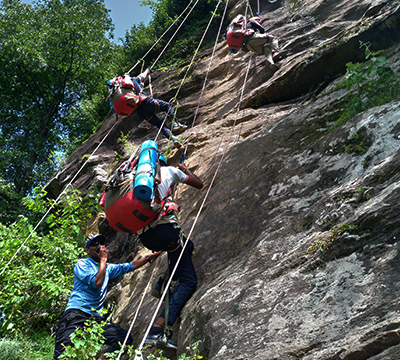 A Mountaineering Institute was established in the natural geographical environs of Manali in the picturesque Kullu Valley, with the name “Western Himalayan Mountaineering Institute” on the 16th of September, 1961, under the dynamic leadership of Pandit Jawaharlal Nehru, the first Prime Minister of India. It is one of the largest adventure training institutes in the world and the best in India. No doubt, the establishment of such kind of Institute was a giant step which added a new chapter to the history of mountaineering. For this spectacular and great deed, the role of Sardar Pratap Singh Kairon, the then Chief Minister of Panjab, will always be remembered. The Institute is fortunate to have had late Mr. Harnam Singh Thakur as its founder Director who steered the organization for nearly two and half decades with a vision which only a few can boast of.

The Institute has played a pioneering role in bringing Manali in particular and Himachal Pradesh in general on to the world map as a paradise for adventure lovers. It has been successfully conducting adventure activities like Mountaineering, Rock Climbing, Trekking, Adventure Camps, Skiing, Water Sports, Disaster Management, Mountain Biking and Mountaineering Expedition for decades now. The hallmark of the Institute is its easy accessibility to people from all walks of life, as it offers them a golden opportunity to enroll themselves for participation in one or the other adventure activity whichever suits them.

The Institute is proud to have faculty of qualified and professional instructors and officers having number of prominent peaks, including the Mount Everest, to their credit. It is doing yeoman’s service in the field of adventure training, under the guidance and able leadership of Shri Jai Ram Thakur, Hon’ble Chief Minister of Himachal Pradesh.

Undoubtedly, the credit of having trained a large number of trainees (about 1, 86, 654 youth, both from home and abroad), in different disciplines of adventure sports, goes to the Institute. It is a matter of immense pride for the Institute for having produced a large number of mountaineers and skiers of international eminence also and has had the privilege of holding various national level seminars on Mountain Sports, Youth & leisure activities. Number of international leaders, dignitaries, and spiritual leaders like His Holiness the Dalai Lama, has graced the Institute with their visits.

The headquarters of Institute is located near the sylvan mountain resort town of Manali, on the left bank of the river Beas and its sprawling campus is surrounded by lofty and handsome cedar trees. Apart from its administrative block which comprises of a museum, a library, lecture halls, conference rooms and offices, it also has adequate facilities available to accommodate 300 people at a time and an auditorium with a seating capacity of 650, having all kinds of audio visual gadgets, for holding seminars and conferences. In addition to the its headquarters at Manali, various adventure training courses and programmes are being conducted at the other adventure centers of the Institute also situated at Mcleodganj in Dharamshala (District Kangra), Pong Dam (District Kangra), Bilaspur (District Bilaspur), Narkanda and Hatkoti (District Shimla), Bharmaur (District Chamba), Jispa (District Lahoul & Spiti), Solang, near Manali (District Kullu) and Pirdi (District Kullu).

The Rishis and savants of yore used to come to the Himalaya to seek wisdom and solace. Every nook and corner of Himachal Pradesh is, indeed, a paradise for trekkers, skiers, mountaineers and other adventure lovers. The Atal Bihari Vajpayee Institute of Mountaineering and Allied Sports Manali takes this opportunity and immense pride in extending its warm invitation to one and all to join it, be a part of any adventure programme of one’s choice and feel and enjoy the bounty of nature.